The Harvest Time Blues are back… 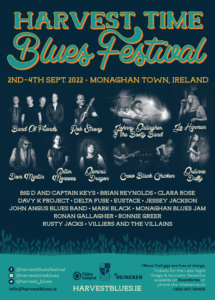 Monaghan’s renowned Blues Festival is back after a three year hiatus. The festival started in 1991 but between the recent lockdowns and year or two missed in between, it means that this year is the 25th year of the festival actually happening – the silver jubilee of bringing the blues to Monaghan. This humble town has played host to some very impressive international and homegrown Blues acts over the years and we like to think that this year will be no different.

On the Friday Late Night Stage we have the award-winning and soulful voice of Jo Harman joining us from the UK whose music has been described as ‘sincere and heart-felt’. She is followed by Rob Strong, known as the ‘Godfather of Irish Soul’ and who at over 75 years of age, is still going “strong” (excuse the pun).

Saturday on the Late Night Stage will see Geminii Dragon perform, travelling all the way from the bayous of Louisiana, a fresh face to the scene, the band are described as ‘blues on steroids’. Next we have the powerful and charismatic Johnny Gallagher and the Boxty Band, bringing us what can only be described as a larger than life presence and wizardry on guitar.

On Sunday we have Dom Martin, the Belfast native who has made a fairly ‘meteoric’ rise in terms of today’s industry and whose voice brings to mind comparisons to John Martyn, Rory Gallagher, even Foy Vance. Closing the Late Night Stage then we have Gerry McAvoy’s Band Of Friends. Gerry recorded and toured with Rory Gallagher for 20 years and has generously offered to bring along two of Gallagher’s amps that haven’t been used since his passing. What an honour! Tickets for the Late Night Stage are €15 per night.

The Blues Trail consists of six stages this year – The Squealing Pig, The Brewery Bar (Upstairs in Mc Kenna’s), The Tavern Bar (Westenra), Terry’s Bar, Mc Kenna’s Yard and the Diamond Marquee. There is a seriously strong lineup including Irish acts Crow Black Chicken, Davy K Project, Ronnie Greer, Delta Fuse, Rusty Jacks, Mark S Black and Villiers and the Villains. Joining us from Los Angeles is Brazilian born Artur Menezes. From Scotland we have Eustace. John Angus Blues Band join us from England and who could forget our very own, homegrown Monaghan legends Gráinne Duffy and Clara Rose.

The weekend will also see the Monaghan Blues Jam perform on Thursday to warm us up for the festivities and again on Sunday in Mc Kenna’s. Look out for the Alternative Blues Stage on Saturday too featuring lots of talent from our own doorstep. All Blues Trail gigs are free of charge.

For some easy listening on the Saturday and Sunday afternoons, we have the Acoustic Sessions. This includes Cootehill man Brian Reynolds, Mohill native Ronan Gallagher, Dom Martin will make another appearance, unplugged this time. Last but not least we have dynamic duo Big D & Captain Keys with a little piano thrown in for good measure. Tickets for the Acoustic Sessions are €5 per day.

Weekend Combo Tickets are also available for €45 and give access to all gigs across the board. All tickets can be purchased via Eventbrite or phone the Westenra on +353 (47) 74400.

As always the Survivor’s Night will take place on the Monday night in McKenna’s. For all those devoted and dedicated enough to make it that far, it is the traditional way to mark the end of the festival for another year.

Accommodation is running low so for anyone from out of town – get booking asap! We also have two free campsites available for camper vans, caravans and tents. Links to accommodation and a booking form for the campsites, as well as any further information can be found on the ‘Accommodation’ page on our website – harvestblues.ie