The Black Pig’s Dyke, also known as the Black Pig’s Race and the Worm Ditch, is an extensive linear earthwork dating back to the Iron Age.  One well preserved section of the Dyke at Aghareagh West near Scotshouse was taken over by Monaghan County Council in 1976.  Under the Council’s care, a number of archaeological investigations have been carried out to learn more about the monument, as well as the recently discovered bronze age settlement nearby.

Monaghan County Council commissioned a Conservation Management Plan to assess the heritage significance of the dyke in this location and to identify a series of measures by which its heritage can be better conserved, protected and interpreted.  These will culminate in a prioritised action plan of projects for implementation as funding becomes available.  The project will help inform the conversation of the wider lengths of the Dyke elsewhere in the County. 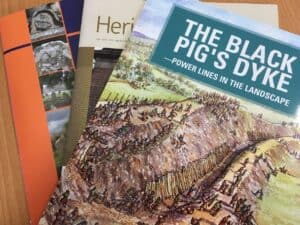 This work has now been completed and the final plan and supporting documentation can be viewed at the following links: