As we approach the August Bank Holiday weekend, in a year which has seen a marked increase in the numbers of people who have lost their lives on our roads, Monaghan County Council’s Road Safety Officer is encouraging everyone to do their part to stay safe.

It is estimated that driver fatigue is a contributory factor in as many as one in five driver deaths in Ireland and tiredness-related collisions are three times more likely to be fatal or result in a serious injury because of the high impact speed and lack of avoiding action.

Speaking on the run up to the Holiday Weekend, Adrian O’Sullivan Road Safety Officer has the following advice to all road users. “There will be increased amounts of traffic on the roads as we head off on a well-deserved break and for many there will be long journeys ahead. Driver fatigue can creep up on you slowly and it is impossible to fight it and the risks can be tragic. Recognise the signs that you are becoming tired behind the wheel take appropriate action and protect not just yourself but your passengers and other road-users.  You should never fight sleep at the wheel.” added Adrian.

Research carried out by the Road Safety Authority has found that 28% of motorists in Ireland say they have fallen asleep or nodded off, even if only for a moment when driving.   Among people who drive for work, this figure increases to 33%.  Those most at risk from driver fatigue are:

The Road Safety Officer has also appealed to passengers to do their bit. “Tiredness related collisions can have catastrophic consequences as drivers are less likely to take avoiding actions, so if you’re in a car being driven by a tired driver, speak up. Ask them to pull over safely and follow the ‘Stop Sip Sleep’ advice”. I would urge all those travelling this weekend to plan their journeys and don’t try to fight sleep at the wheel. Turning the radio up or opening the window will not prevent fatigue. The only cure for tiredness is sleep.  Many sleep-related crashes are due to lifestyle issues such as driving without adequate sleep, whilst others are due to various medical conditions such as Obstructive Sleep Apnoea Syndrome, neurological conditions or the use of certain prescription and non-prescription (over the counter) medicines.”

“Anyone taking medications that are in doubt should check with their doctor or pharmacist who will advise about treatment and any restrictions to their licence, to ensure they keep themselves and other safe while driving” added the Road Safety Officer.

A total of 89 people have lost their lives on Irish roads as at 22nd July 2022. This represents an increase of twenty-six when compared to the same period last year. Two of these fatalities occurred in County Monaghan.   Of the ten people killed on Co Monaghan roads from January 2020 to date, nine were male. 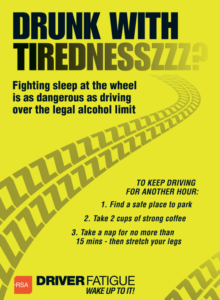