Monaghan Women’s Assembly are delighted to announce a funding allocation of €22,000 from the Department of Housing, Local Government and Heritage.

Funding was received for three projects that will take place in 2023/2024: to Raise Awareness of Monaghan Women’s Assembly, to provide workshops on developing women’s skills such as public speaking, marketing and promotion, and to host a webinar for women in the form of a community consultation that will inform an awareness of the issues being raised across the board by female members of our community.

Cllr Cathy Bennett, Chairperson of the MWA stated “MWA are delighted to receive this funding to carry out three major projects over the coming two years.  MWA is going from strength to strength since its inception in 2021 and our Steering Committee will be working hard to oversee the completion of these projects, whose main aim is to try and encourage women to enter local politics”. 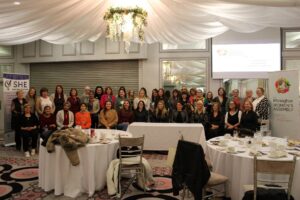 Aside from these projects, the MWA are also working in conjunction with the Western Midlands Northern Regional Caucus (WoMeN’s Regional Caucus) to deliver three more projects: the organisation of a co-ordinated ‘Invert your Council’ debate to coincide with International Women’s Day 2023, to develop a legacy project WoMeN’s Caucus Booklet and to organise and fund delivery of training, support and development, to all members of the caucus, which will help them in their role as public representatives.

Cllr Bennett went on to say that the objectives of the MWA, which is to support, enable and encourage women to get involved in, and stay in local politics, to provide a platform for local women to raise and discuss issues that impact on their lives with the female Councillors of Monaghan County Council, and to ensure gender equality and diversification is embedded in the policy and practices of the Local Authority in the future. For any queries on the MWA, please email womensassembly@monaghancoco.ie, and follow us on FB.