Canada Day in Monaghan recognises the historical and ever increasing links shared between our two great countries. 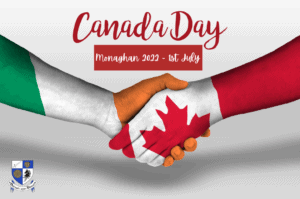 Why Canada Day in Monaghan?

In 1994 County Monaghan entered into a municipal twinning agreement with Prince Edward Island as it is within this small island of 140,000 inhabitants, located in the Atlantic Maritimes region, that the most concentrated population of Monaghan descendants exists today outside of Ireland. From research conducted over three decades ago by Professor Brendan O’Grady University of PEI, letters and documents from ship manifests and church records verify that over three thousand immigrants arrived to PEI from 1830 to 1845, mostly from the parishes of Monaghan/Rackwallace, Tydavnet, Clontibret, Donagh, Glaslough and Emyvale. The annual events held by the Fort Augustus Irish Descendants Association celebrate their links with Monaghan as well as the significant contribution their forebears had in the social, economic and cultural development of their island.

In 1999 a similar twinning agreement was signed between Monaghan County Council and Miramichi City Council in recognition of the strong ancestral links that exist between this region and Ireland. The largest Irish festival in Canada has been held here continuously for 32 years, Canada’s Irish Festival on the Miramichi, and is home of the renowned Nelson Doyle School of Irish Dancing.

The above is a snapshot of the wonderful affinity that exists between Canada, County Monaghan and the entire island of Ireland where hundreds of thousands departed in search of a better life across the huge expanses of Canada. That migratory pattern prevails once again today where tens of thousands of young Irish take enthusiasm and knowledge across the Atlantic to work within the strong Canadian economy.

There is much to celebrate between our two countries, culture and shared heritage. Come to Monaghan for the July 1st weekend and be part of that celebration!